Another week has come and gone, bless!! Sister Chantry
and I have been plodding along, tryna to get to know
the members and find some more investigators.
Always an adventure as a missionary.
Some highlights from the week:
Josh who is 12 and he is getting baptised this Saturday!
He passed his interview this weekend and is so excited :)
Its so cute his enthusiasm and excitement to learn more
about the gospel. There is a great group of youth in our
ward so that's a blessing!
We saw one of our investigators from the Philippines
who is a very strong Catholic, but her 2 sons converted to Mormonism in the Philippines so they are really
good influences. She has read some of the
Book of Mormon and believes it's true she just
won't come to church because she can't abandon
her church. So frustrating! We were able to bring a
member who used to be Catholic and it was great for
her to share her experiences.
We went on exchange with the Billingham sisters
and it was so fun!  I love getting to know other sisters
and learning from them.
We went by one of our investigators house this week
because she hasn't been answering our calls.
She opened the door and we had a good chat,
but she basically said that she doesn't want this
in her life right now. So that was pretty sad.
But we knocked on her. Neighbours door and she
let us in! We were able to teach her a bit and she
has a lot of concerns and questions but she is open
to learning more!
Something we have talked about at Ward Cord
and with our Bishop recently is listening & doing.
We have talked about actually listening to the
Holy Ghost and acting on the first prompting we receive.
I think it's so key that if we want to follow Heavenly Father
and do what He wants us to we need to listen to Him!
I hope you all have a great week!
Love, Sister Stevens 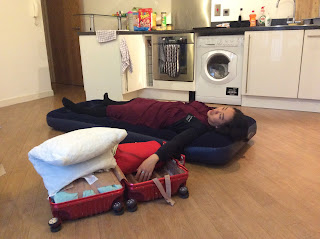 A record of Sister Stevens missionary service and experiences in the England, Leeds Mission